The Piran Salt Pans are among those rare salt pans in the world where salt is produced using centuries-old processes, involving entirely natural crystallisation, working by hand and employing tools and procedures used by our ancestors.

AboutParkProducing SaltSalt FlowerPiran SaltSalt panning
In the area, known as Sečovlje Salina Nature Park, the symbiosis between man and nature is marked with centuries-old tradition of salt-making; from the Middle Ages till today it has created a unique salina landscape.

Owing to its specific architectural and historical features as well as to the exceptional diversity of plants and animals (such as 270 species of birds), the 650 ha large area of once thriving salt-pans is today protected as a cultural monument and nature park.

In these northernmost Mediterranean salt-pans, salt is still produced traditionally, with classical salt-pan methods and tools, which is the reason why salt has retained its very special taste and exceptional characteristics. And you need no more than a fleeting glance at nature, which seems as if time stopped in it ages ago, to be totally enraptured by it.

At Sečovlje Salina you are welcome every day. In the morning you can enter the Park about an hour after sunrise, and leave it in the evening about an hour before sunset. In the cold half of the year, the Park is, as a rule, open between 9 a.m. and 5 p.m., and between 8 a.m. and 8 p.m. in the warm part of the year. At dusk and during the night the Park is thus again earmarked for their permanent inhabitants to recover from the daytime visitors.

Soline26
Sečovlje Salina Nature Park covers about 750 ha along the Slovene-Croatian boundary in the extreme south western part of Slovenia, in the southern part of the Community of Piran. Its northern part, where active salt-making is still taking place, is called Lera. From the Park’s southern part, called Fontanigge, it is separated by the bed of the Drnica stream.

The Fontanigge is full of large basins which, however, are being gradually overgrown by the characteristic salt-loving vegetation –halophytes. The basins are crisscrossed by the system of ancient levees, amongst which mostly the larger ones have been preserved. Along the wide channels, the former salt-pan houses are scattered, which with their characteristic appearance co-create the truly unique image of the salina landscape. The main freshwater vein is the Dragonja river, which after few tens of kilometres of its course joins the sea at the Sečovlje salt-pans.

At Fontanigge, salt-harvesting was abandoned in the 1960s, but the tradition of salt-making, which originates from the 14th century, is still practiced within the Museum of Salt-making. Here, each salt-field used to constitute an independent salt-pan with its own basins for seawater condensation and crystallisation.

At Lera (still »active« pans), the salt-fields used for crystallisation of salt are separated from the fields used for condensation of seawater (evaporation basins). The difference between the two procedures of salt-making therefore lies in the technological process, associated with the preparation of brine, harvest and storage of salt, and in very diverse implements. Their common characteristics, however, lies in the fact that at Fontanigge and Lera the salters cultivate, on the bottom of salt-fields, the so-called petola, a special type of biosediment that prevents sea mud from merging with salt and at the same time restrains separate ions from building in salt. 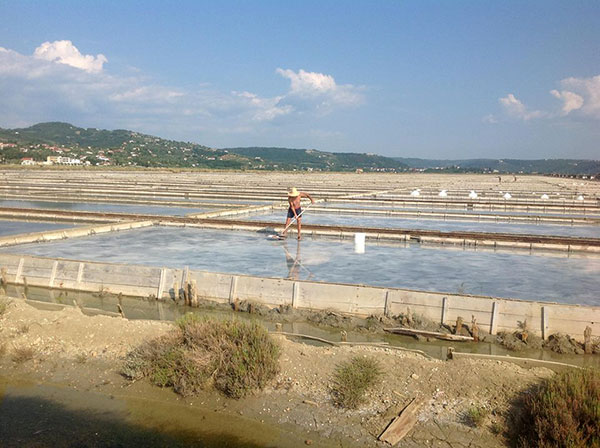 The Sečovlje and Strunjan salt-pans are the only ones in this part of the Adriatic, where salt is still being produced and where the traditional procedure of its production has survived till this very day.

Today, the economic role of the pans is subjected to its nature conservationist and cultural roles: the produced salt is a delicacy to gourmets; preservation of the salt-pan customs and habits has been aided by the cultural heritage awareness; the salt-pan area is giving shelter to the rare or special plant and animal species and is at the same time a reserve of man’s ecologically precious residential environment and recollection of once rich Mediterranean cultural heritage and currently disappearing landscape. 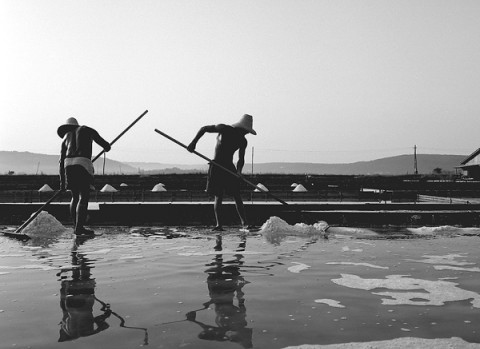 Tiny, white to pink pyramid-shaped crystals – these are the most precious harvest from the Piran Salt Pans. They form on the surface of the brine only when the air is still, for the slightest ripple disturbs them. At harvest time the saltmakers use a special webbed spatula to remove them gently from the surface of the saltfields, where they form in a thin layer. Fleur de Sel enhances salads, carpaccios, seafood specialities and other culinary masterpieces that are seasoned after serving. The quality of Piran FLEUR DE SEL exceeds even the prized French Fleur de Sel variety.

Fleur de Sel is used by gourmets and in original cuisine as an indispensable condiment whose flavour harmoniously complements any dish. Only in this way can a dish benefit from the flavour and gentle aroma of these delicate crystals. It has pride of place on the table – like the best extra virgin olive oil or balsamic vinegar. 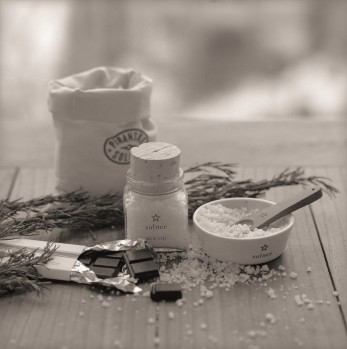 PIRAN SALT (PIRANSKA SOL) with protected designation of origin (PDO) is produced according to an approved traditional procedure, according to an almost 700-year-old tradition and only with traditional tools. The basic process is natural crystallisation on salt-fields, where salt is collected on a bio-sediment base of a few millimetres thickness called PETOLA, composed of minerals and micro-organisms.

The harvest only depends on the forces of nature – of the sun, wind, sea, and the assiduous work of the salt pan workers. The salt from the Sečovlje Salina Nature Park is light, rich in minerals of the sea, and of an exceptional taste that provides dishes with extra culinary exceptionalness. In 2005, the company successfully completed the certification process carried out by Bureau Veritas, the authorised certification house of the Slovenian Ministry of Agriculture, Forestry, and Food, for a top-notch product with a long tradition – PIRAN SALT with the denomination of origin. In 2014, the European Commission entered Piran Salt into the Register of protected designations of origin and protected geographical indications, which is the highest level of protection within the framework of the European scheme of farming produce and food protection. With this, PIRAN SALT (PIRANSKA SOL) with protected designation of origin (PDO) was set on an equal footing with the world-renowned products, such as champagne, Parma ham, Parmesan cheese and also Istrian olive oil. 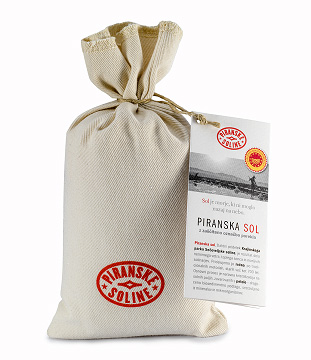 In the abundance of different kinds of high-quality salts, Piran salt is one of the most prominent as it is cultivated according to the method of more than 700 years ago. The Sečovlje salt pans are the northernmost still functioning salt pans in the Mediterranean area and one of the few salt pans in the world where salt is produced after several centuries-old processes originating from at least the 14th century. Their speciality is that the salt pan workers cultivate petola at the bottom of the crystallization ponds. This is a biosediment which prevents the sea mud merging with the salt and gives the salt numerous microelements and minerals necessary for the human organism. It is cultivated completely through natural crystallization using their bare hands, and the tools and procedures of their ancestors.

Salt panning distinctively shaped the cultural landscape, i.e. areas that are the work of human hands.